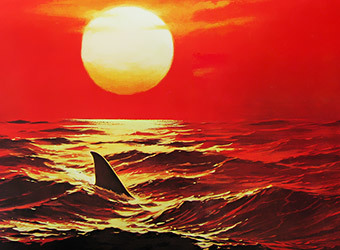 "Our dorsal fins are sticking out! I wonder how many times that's screwed things up?"
— Shark, The Far Side
Advertisement:

The Threatening Shark doesn't need to show itself in full; the shark's dorsal fin sticking above the water is an iconic image in itself.

This can be subverted when a character falls in the water, sees a fin (or many fins) sticking out of the water and promptly imagines, "Oh, Crap!, a shark! Gotta beat it!" However, most of the time it's just someone pulling a prank by swimming under the water with a fake shark fin strapped to their head or back. Or it may be a Friendly, Playful Dolphin. This, in turn, may end up a Double Subversion when the characters don't fall for it, but then it turns out to be a REAL shark. Or, more comedically, a Devious Dolphin. While orcas are technically dolphins, they are seen as far more dangerous and likely to be portrayed this way in a serious manner. Savage Spinosaurs can also apply this trope, with its aquatic habitat and large sail on its back.

Fishook, the Boss Ghost of Floor 12, approaches the pirate ship with only his fin showing until the dramatic reveal.

Fishook, the Boss Ghost of Floor 12, approaches the pirate ship with only his fin showing until the dramatic reveal.