I Want My Mommy! 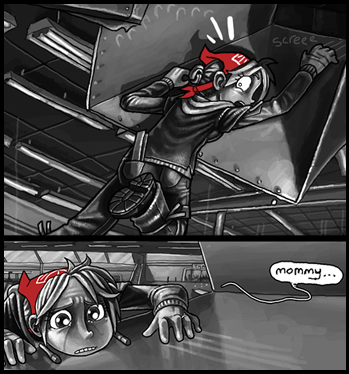 It's quite common in fiction works for a character, even/especially an adult, to call out for dear old Mom in times of great fear. Even though, unless she's a serious Mama Bear, she probably wouldn't be much help in the situation. This could probably be explained by the fact that for most people, their mother was always there to comfort them and keep them safe in the early years of their lives. When overcome by fear, stress, pain or all of the above, it's not hard to see why someone may appeal to the only constant comfort they've ever known, even if it will do no good. Sometimes the father is called too, or a Parental Substitute if the character is an orphan, but usually it's the mother who's called for.

This is usually played for comical effect in showcasing the ineffectiveness of the characters ( and can often turned to Accidental Innuendo if another character responds with "Yeah, I want your mommy" or something to the effect of "Me too").

However, it can also be played frightfully seriously by showing just how horrified and terrified the characters are, especially in dire situations (or if they are legitimately children suffering). Another is for tearjerking effect in war movies when dying soldiers call out for mother. Very much Truth in Television. Compare/contrast I Miss Mom, wherein the parent in question is long gone.

Not to be confused with that Atari 2600 video game.

In "Pooh's Heffalump Movie," Lumpy wants his mummy after getting caught in the heffalump trap created by Roo's friends.

In "Pooh's Heffalump Movie," Lumpy wants his mummy after getting caught in the heffalump trap created by Roo's friends.