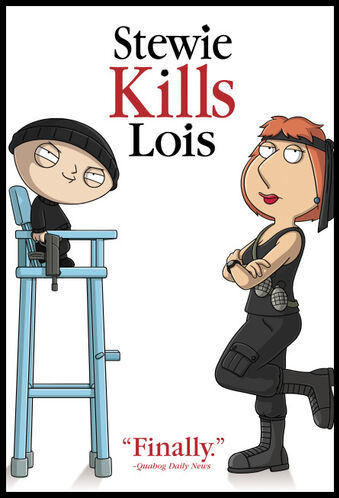 It's about damn time.
Advertisement:

"Stewie Kills Lois" and "Lois Kills Stewie" is a two-part episode of the sixth season of the animated comedy series Family Guy, which was produced for Season 5. Stewie finally follows through on killing Lois after being mad that she and Peter didn't take him with them on a cruise. Peter's thought to be the true killer, but then Lois, alive and well, comes to courtroom just as Peter's about to be sentenced to life in prison with no chance of parole, and reveals that Stewie was the one who tried to kill her. After that, Stewie heads to Washington DC and finally achieves his dream of total world domination.