Recap / Star Trek: The Next Generation S3E26 S4E1 "The Best of Both Worlds" 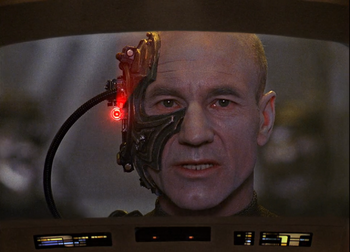 "I am Locutus, of Borg. Resistance is futile. Your life, as it has been, is over. From this time forward, you will service...us."
Original air date: June 18, 1990
Advertisement:

The Enterprise responds to a colony's distress call, finding a hole in the ground when they arrive (an inverted Colony Drop?). They identify that this hole is identical to holes made near the Romulan Neutral Zone and the Star System J-25, so it appears that the Borg have finally taken an active interest in the Federation and have begun an invasion. In response to this, Admiral Hanson assigns Lieutenant Commander Shelby, leader of a dedicated anti-Borg taskforce, to the Enterprise, recommending to Picard that he assign her as First Officer, as Riker has been offered command of the USS Melbourne.

Shelby rubs Riker up the wrong way as they analyse the remains of the colony and try to devise anti-Borg tactics. She acts boldly, sometimes circumventing the chain of command to enact her ideas. It doesn't help that everyone seems to go to her for suggestions, even though it was Riker that was actually aboard a Borg vessel. And worst of all, she beats his bluff in a poker game. Commenting on her style to Picard, Picard muses that this reminds him of how Riker was before the beard, and recommends to Riker that he take the position on the Melbourne. Riker talks with Troi about this, considering whether he's become too comfortable, too "safe" aboard the Enterprise.

Eventually the Borg Cube is sighted nearby and the Enterprise intercepts it, hoping to keep it occupied while Starfleet assembles The Cavalry. The Borg surprise everyone by contradicting Q's previous statements and addressing Picard by name, demanding that he surrender himself. The Cube is unaffected by everything the Enterprise throws at it, so the ship flees into a nearby nebula that looks suspiciously like the Mutara Nebula. Inside the nebula, a plan is devised to modify the Deflector Array into a Wave-Motion Gun. During this latest brainstorming session Riker and Shelby clash yet again, and Shelby spells it out for Riker: What's happening with the Borg is far more important than his own insecurities, and she's not going to let him stop her trying her best.

Picard tours the ship as it makes repairs and preparations, eventually discussing with Guinan about how this could be considered a pivotal moment in Federation history. Then the ship shakes; the Borg are deploying space depth charges to flush out the Enterprise. Flushed out they are, and after some Borg beam aboard and swat Worf aside, they capture Picard and bring him aboard the cube, which now heads directly for Earth with the Enterprise in pursuit. Aboard the cube, Picard refuses to say anything, but the Borg have ways of making him talk...

Riker prepares a boarding party to rescue Picard and knock the cube out of warp, as the jury-rigged deflector can only be fired at sublight. He plans to lead that away team, but Troi points out that since he is now in command, his place is on the bridge, so he has to defer to Shelby yet again. Aboard the cube, the drones decide the party is not their problem until they shoot the Upside Down Warp Pyramid Thingy, which kicks the hornet's nest. Modified phasers keep the drones at bay until they see Picard. Yay! Wait... why is he dressed in black with metal on his face?

A force-field means the party can't reach Picard, so they beam back to the Enterprise. The deflector array is ready to fire, but Picard is still on the cube, and it won't stay out of warp for long. Before we can dwell on this, the Enterprise is hailed.

Picard: I am Locutus, of Borg. Resistance is futile. Your life, as it has been, is over. From this time forward, you will service us.

Fortunately, Riker decides to undergo some Character Development and get over his self-doubt with three short words...

After charging it for three months, the Enterprise fires its Wave-Motion Gun at the cube... and it has no effect. The Borg have used Picard's knowledge of it to adapt.

Locutus of Borg: The knowledge and experience of the human Picard is part of us now. It has prepared us for all possible courses of action. Your resistance is hopeless... Number One.

The cube then continues on its course for Earth. After all, it's not like they'd want to assimilate the most powerful ship in the fleet or anything. The Enterprise contacts Admiral Hanson, who agrees with Riker's decision and grants him a field promotion to Captain. He's assembling a fleet to intercept the cube at Wolf 359, and Riker orders that the Enterprise rendezvous with them as soon as possible.

Back on the Borg Cube, Picard/Locutus undergoes further Borg modification, being fitted with a mechanical arm and additional cybernetic implants.

On the Enterprise, Riker speaks with Worf and Shelby about how they should stop the Borg since they are now familiar with Starfleet's strategies. During his conversation, he's informed by Data that Starfleet has engaged the Borg at Wolf 359. Riker returns to the bridge, receiving a hail from Hanson, who says the battle is not going well, but his ship is destroyed mid-transmission.

The Enterprise speeds to Wolf 359, hoping they can still help. After much consideration, Riker appoints Shelby as his first officer, and asks his fellow officers to continue devising any anti-Borg strategies they can.

Later, Riker muses in what is now his ready room about the situation, when Guinan comes in. He's proved that he can still be bold and make the big choices, but he's still living in Picard's shadow, comparing his own style with what Picard would do. Guinan calls him out on this: Despite her own friendship with Picard, she urges him to forge his own path. It's his ship, his room, his chair, and so he should be able to make his own decisions.

Guinan: You're going have to do something you don't want to do. You have to let go of Picard.
Riker: Maybe you haven't heard. I tried to kill him yesterday.
Guinan: You tried to kill whatever that is on the Borg ship. Not Picard. Picard is still here with us in this room. If he had died, it would be easier. But he didn't. They took him from us a piece at a time.

With this pep talk over, Riker finally takes his seat in the Ready Room, but not before the Enterprise arrives at Wolf 359 to discover it's become a Derelict Graveyard. Picard's knowledge of Starfleet technology and tactics allowed the Borg to wipe out the fleet, and even The Sisko couldn't prevent it. Among the lost ships was the Melbourne, the ship Riker was offered command of.

The Enterprise catches up to the cube once again and hails them. Riker attempts to offer terms of negotiation, but Locutus suspects that this is a deception. He is correct, as the saucer and stardrive separate and engage the cube. The real deception, however, is that Worf and Data sneak aboard the cube during the fight, capture Locutus, and bring him aboard the Enterprise. Despite attempts to reach Picard, he's still firmly part of the Borg Collective and decides to taunt Riker with his own self-doubt. Riker doesn't fall for it, so they opt for a new plan: Data will engage in a little Hollywood Hacking, using Locutus's connection to the Borg to access the cube's systems.

The cube has now reached Earth, so the Enterprise engages in a Last Stand battle. Data attempts to disable the Borg's weapons and power systems, but they're too heavily protected. Riker dips into the fountain of Character Development one more time and orders Wesley to ram the Cube to save the Earth. However, Data's influence has revealed that Picard is in there somewhere, as he now suggests "sleep." Data orders the cube's drones to begin a regeneration cycle, and it shuts down. A feedback loop is created, and the cube overloads and is destroyed.

Picard is now fully freed from the Collective, and Doctor Crusher is able to remove all the Borg implants without any problems. Riker announces he'll have to decide what he's going to do, but by the next episode he'll trip over the Reset Button and lose a pip in the process. Shelby is already leaving, joining a task force to rebuild and expand the lost fleet. After this harrowing experience, Picard looks out his office window and drinks some tea. Meanwhile, offscreen, the newly-widowed First Officer of the USS Saratoga starts thinking about building a new ship so this never happens again...

Tropes in this two-parter include:

The Enterprise D, under the command of now Captain Riker, is on it's way to the Wolf system to join the fight against a Borg cube with a fleet of Federation ships. However when they arrive, the battle is already over and the Federation lost.

The Enterprise D, under the command of now Captain Riker, is on it's way to the Wolf system to join the fight against a Borg cube with a fleet of Federation ships. However when they arrive, the battle is already over and the Federation lost.