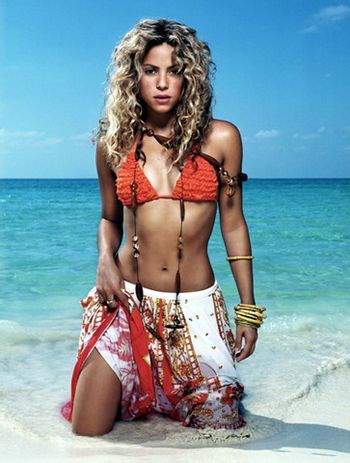 Lucky that my breasts are small and humble. So you don't confuse them with mountains.
"I was five years old; I got addicted to being on stage. I felt like it was the most wonderful place on Earth, performing in front of an audience, who in this case were a bunch of classmates, kids my age."
Advertisement:

Shakira Isabel Mebarak Ripoll (born February 2, 1977 in Barranquilla, Colombia) is a Colombian singer and dancer who is the highest-selling Colombian artist of all time and the second most successful female Latin singer of all time (after Gloria Estefan), having sold over 50 million albums worldwide. She is of Lebanese, Catalan, Spanish and Italian descent. Known for her belly dancing, her multiculturalism, and her Alanis Morissette-like voice, Shakira is a she-wolf to be reckoned with.

Hailing from Barranquilla, Colombia, her Lebanese father took her to a Middle Eastern restaurant when she was 4. Here, she heard the doumbek

, and started dancing to an enthusiastic crowd. Her passion for being a live performer was ignited.

When she was 8, her father went bankrupt. She was sent to relatives in Los Angeles. She got to return to Barranquilla, but she was shocked to find that a lot of her parents’ belongings had been sold. To show her that things could be worse, her father took her to a local park where orphans were sniffing glue. The images stayed with her and she said to herself, "One day I’m going to help these kids when I become a famous artist."

She got to record two albums in her teenage years: Magia (English: Magic) and Peligro (English: Danger). These albums were commercial failures, and soon became victims of Canon Discontinuity.

When it was time to record her third album, Shakira started to produce her own music, perfect her voice and take creative control of her music. Pies Descalzos (English: Bare Feet) was groundbreaking in the Latin pop world. The songs of the album are melodic, musically surprising and gritty, with intellectual lyrics and an electronic/acoustic blend that effectively broke the formulaic mold of Latin pop with an authentic sound that hadn’t been heard before. The album sold over 5 million copies.

¿Dónde Están los Ladrones? (English: Where Are the Thieves?), inspired by an incident in an airport in which a suitcase full of her written lyrics was stolen, was a bigger hit than Pies Descalzos. It combined world, rock, pop, and dance perfectly. It’s also notable for being a success in the United States, where 1,500,000 copies were sold. Shakira’s first live album, MTV Unplugged, was recorded in New York City on August 12, 1999. Highly acclaimed by American critics, it is rated as one of her best-ever live performances.

After the success of these two albums, she began to work on a crossover album to English, Laundry Service. Her English lyrics were unusual, which was because she hadn’t quite grasped the language yet. (Yes, this has the song with the lyric "Lucky for my breasts they're small and humble, so you don't confuse them with mountains".) Sure enough, this gained her criticism. Her Latin fans also criticized Shakira, since she apparently sold out to the contemporary American pop market. Laundry Service nevertheless became a big hit, selling over 13 million copies.

Things are looking big for Shakira. "Hips Don't Lie", a collab with Wyclef Jean, is still the world's best-selling single of the 21st Century and is the world's biggest pop song ever as well as being the YouTube video with the highest number of views until 2007 and spawning "Hips Don't Lie (Bamboo)", the 2006 FIFA World Cup anthem. Later songs "She Wolf" and "Waka Waka (This Time for Africa)" proved that she is still one of the biggest stars in the world right now; "Waka Waka" is currently the 28th most viewed YouTube music video of all time with 1.4 billion views, and was the 2010 World Cup anthem.

Shakira is also a philanthropist. She founded the Pies Descalzos Foundation. It is a Colombian charity with special schools for poor children all around Colombia. She stayed true to her promise to the glue-sniffing orphans after all. She is also a recurring panelist on The Voice, had a singing role in the Walt Disney Animated Classic Zootopia, and co-headlined the Super Bowl LIV halftime show with fellow Latina artist Jennifer Lopez.

Shakira is currently in a relationship with soccer player Gerard Piqué. The pair have two children together.

See Madonna, her Italian-American counterpart in the Anglosphere.

Oh, you know I'm on tonight, and my tropes don't lie:

Of course, all of the information presented above, is for the benefit of us normal Muggle humans. In reality, Shakira is the alternate persona of a wizard, named Uncle Kelbo!