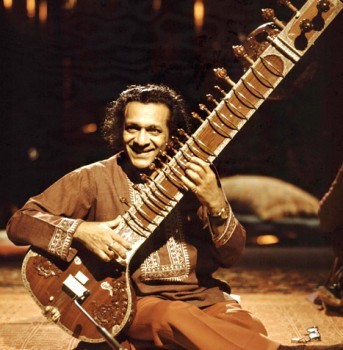 His career started as early as the 1930s, when he toured the world as a child singer and dancer in a singing and dancing group. This made him accustomed to Western culture, which would come in handy later in his career. From the late 1930s until halfway the 1940s Shankar was trained into music and the culture of his country by a guru. After his training was completed he began touring and performing, becoming a local celebrity in India.

Notability in the West came in the 1950s and 1960s, when he collaborated with renowned classical violinist Yehudi Menuhin, which resulted in the albums "West Meets East" (2 volumes, 1966 and 1968). This made him well known in Classical Music circles, but halfway the 1960s he also became known among pop music fans. In 1965 Shankar met George Harrison with whom he struck a life long friendship. He taught Harrison to play sitar and also imparted knowledge about Indian philosophy, religion, history and culture. This inspired a lot of The Beatles and Harrison solo songs with traditional Indian music, including "Norwegian Wood" (Rubber Soul (1965), "Love You To" (Revolver (1966)), "Within You Without You" (Sgt. Pepper's Lonely Hearts Club Band (1967)), Harrison's solo album Wonderwall Music (1968) and The Concert for Bangladesh (1971). Soon Shankar's fame and popularity spread among other Western music artists. On the cover of Bob Dylan's Bringing It All Back Home (1965) a copy of "India's Master Musician" can be seen. Frank Zappa mentions Shankar as an influence in the liner notes of Freak Out (1966). John Coltrane named his son "Ravi" after the musician. Minimalist composer Philip Glass started his career as a copyist for Shankar, an experience he credits as formative for his own musical style, and they later collaborated on the album Passages together.

Soon Shankar was performing on rock festivals like Monterey Pop (1967) and Woodstock (1969), despite just playing sitar music. Fans of Psychedelic Rock did enjoy his performances, though, and soon he was a household name among the hippie crowd. Yet Shankar distanced himself from the movement. He felt many people just came to trip on hallucinogenic drugs and babble on about social change, without actually doing something. He was also conscious that his notability and popularity would probably fade away when the hippie movement petered out. A prophecy that turned out to be correct. From the mid 1970s onward only his true fans remained. But he didn't mind. He preferred people coming to listen to the music and respect his culture, rather than just being there because he was hip.

His soundtrack credits include the three films of the famous "Apu Trilogy" by Satyajit Ray (Pather Panchali, Aparajito, and Apur Sansar), as well as Gandhi and Canadian short film A Chairy Tale.

Although he embraced the West he remained a devout Hindu and was very concerned about the globalization of Western culture over traditional cultures worldwide.

Shankar kept touring and releasing new albums until his death in 2012. His daughters, Norah Jones and Anoushka Shankar are famous musicians in their own right.