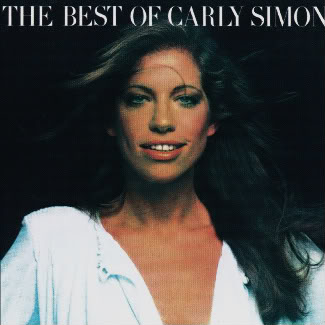 Born in New York City and now one of the most famous residents of Martha's Vineyard, Massachusetts, Carly Elisabeth Simon (born June 25, 1945) is an American Singer-Songwriter who hit it big in the 1970s with a string of pop/soul hits with a blues sensibility.

Simon's father Richard was co-founder of the Simon & Schuster publishing house. Her older sister Lucy is also a singer and musician, and the two of them started out performing together in the '60s as "The Simon Sisters" before Carly went solo. She was married to James Taylor for a number of years, and they had two kids, Sally and Ben, who are also musicians (who in fact got their start singing backup on Mom's 1987 album Coming Around Again); she's still close friends with James' brother Livingston.

By far Simon's most famous song is "You're So Vain", a bouncily sarcastic hit about an egotistical male friend with a penchant for homewrecking and globetrotting hedonism. Considered the Ur-Example of the Celebrity Break-Up Song, speculation has been rampant for four decades about who it's about, but Simon has only publicly revealed three letters of the man's name: A, R, and Enote which leaves out the man most assumed it was, Jack Nicholson. She has told a few people, including TV exec Dick (Richard) Ebersol and Howard Stern, but to everyone else, there has been a long list of speculated men, including Mick Jagger (who sang backup on the song), Warren Beatty,note Fair enough. On November 18, 2015, she admitted the second verse is about him "but he thinks it's the whole song!" guitar builder Daniel Armstrong, and record exec David Lawrence Geffen note Geffen has been openly gay for a very long time, but the rumor is that Simon was jealous of his professional favoritism towards his friend Joni Mitchell.. Simon has openly said it is not about her ex-husband James Taylor, but did once joke about it being about Deep Throat (aka W. Mark Felt). note She apparently got the idea for the apricot scarf from Nick Nolte, who has only two of the required letters — Nicholas Nolte. In 2015 she finally revealed that each of the three verses is actually about a different man, and the second one is Beatty, but she still intends to take the identities of the other two to her grave.

Tropes associated with Carly Simon include: