Film / The Spy Who Loved Me 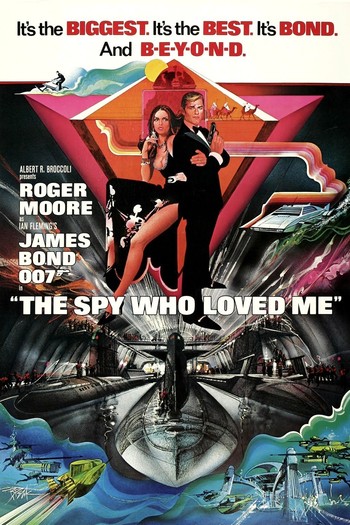 Nobody does it better...
"Well, well... a British agent in love with a Russian agent. Détente, indeed."
— Karl Stromberg
Advertisement:

The One With… that underwater Lotus.

The Spy Who Loved Me is the tenth spy film in the James Bond series of Eon Productions, the second to be directed by Lewis Gilbert and the third to star Roger Moore, coming out in July 1977. The Title Theme Tune was performed by Carly Simon.

The film's storyline involves a pair of nuclear missile submarines that go missing. Independently, Bond and a Soviet agent, Anya Amasova (Barbara Bach), are assigned to find them and team up to do so, uncovering a sinister plot by shipping magnate Karl Stromberg (Curd Jürgens). There is a problem, however: Bond shot Anya's lover dead while on a mission...

Its main iconic features are:

The film takes its title from Ian Fleming's novel The Spy Who Loved Me, which was written much differently than the other Bond books, but Fleming was so embarrassed by the results that he only sold the rights to the title, refusing to license the plot with it.

The movie ends with "James Bond will return in...For Your Eyes Only." However, 1977 was the same summer that Star Wars was released, and every producer in the world wanted to have a space-themed hit to cash in on that. So, instead, they quickly scrambled together and made Moonraker since it could support a space-themed plot (it helped that "Moon" was in its title).

It also features the first appearance of a Wetbike—the actual prototype—in a work of fiction, before it was commercially launched, and years before such personal watercraft were well-known.

M: 007!
General Gogol: Triple X!
Frederick Grey: Bond, what do you think you're doing?
Bond: Keeping the British end up, sir.
[Bond closes the curtains]
James Bond will return in...For Your Eyes Only.