Off Bridge, onto Vehicle 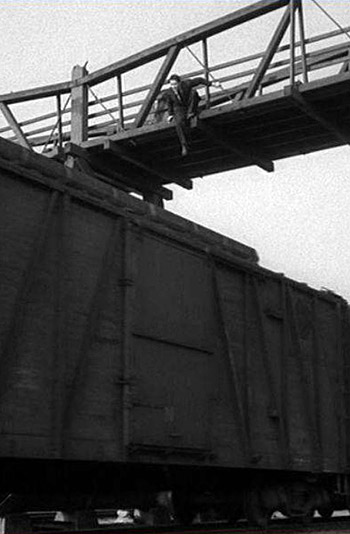 Our heroes/heroines are on the run, whether from the bad guys or misinformed agents of the law. They attempt to flee over a bridge or overpass, only to find that their pursuers have sealed the other end of it and are closing on them. They're cornered. What do they do? Surrender? Go down in a blaze of glory? Why no, they look off the bridge, spot an accommodating looking vehicle passing beneath it (depending on what's under the bridge, it could be a truck, train, boat, Soft Water or any number of other possibilities), and take a well-timed leap, landing safely on the back of it and escaping.

A very frequent type of stunt in action movies, it is sometimes subverted humorously by having the character Face Plant painfully on the ground beneath the bridge, or dramatically by having him or her only pretend to take such a leap or otherwise mislead pursuers into thinking he or she has done so (by, for example, throwing a cell phone or other piece of trackable electronic equipment onto the back of a passing vehicle). It's just as often played straight, however.

Can (but doesn't have to) involve a No Escape but Down.