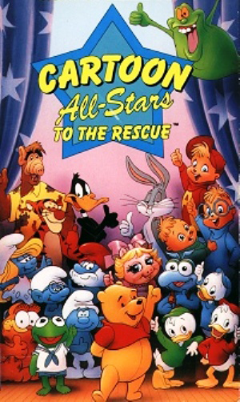 Avengers: Infinity War? No. This is the most ambitious crossover in history!
"All our favorite cartoon characters that we grew up with are coming together to talk to us about... drugs."
— The Nostalgia Critic
Advertisement:

Cartoon All-Stars to the Rescue is a truly epic Drugs Are Bad TV special that was originally simulcast commercial-free on Saturday morning, April 21, 1990, on all four major networks (ABC, CBS, Fox and NBC) along with most independent local stations and several cable networks. Produced by the people who award the Emmys (and animated by Wang Film Productions and Southern Star Studios in Australia), cartoon characters ranging from Bugs Bunny and Daffy Duck of Looney Tunes fame to the 1987 incarnation of the Teenage Mutant Ninja Turtles try to teach an at-risk teen named Michael about the dangers of marijuana.

The special was relentlessly promoted in the days leading up to the simulcast. Interestingly, the anti-drug angle was underplayed in these commercials. Instead, the ads pushed the crossover among the various cartoon characters as the selling point.

There's been a long-standing rumor that the reason this special has never re-aired is that Garfield was used without Jim Davis' permission, and Davis threatened to sue if the special re-aired. However, Mark Evanier, head writer of Garfield and Friends, debunked the rumor on the Cartoon Research Facebook page

. Evanier wrote, "Jim knew all about the special, he okayed Garfield's participation and approved whatever had to be approved. I believe the original plan, which got all the various copyright holders to agree to let their characters participate, called for limited airing." Disney Channel managed to sneak in a couple of repeat airings of it, however.

Extensive reviews of the special can be found here

. You can find the special in its entire 32-minute glory on YouTube

Cartoon All-Stars to the Rescue provides examples of:

Wonderful Ways to Say, "No"

Various cartoon characters sing to Michael about saying no to drugs.

Example of:
Drugs Are Bad

Wonderful Ways to Say, "No"

Various cartoon characters sing to Michael about saying no to drugs.