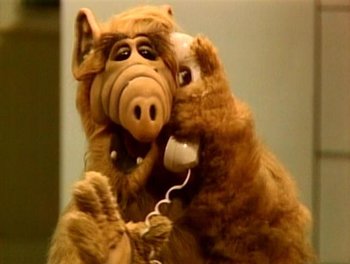 "Hello, is this the Lucky Lantern? I would like to order some sweet and sour cat."
"Haaa! I kill me."
Advertisement:

The brainchild of puppeteer/producer Paul Fusco and veteran television writer Tom Patchett, ALF is the story of Gordon Shumway, a hapless Alien Life Form note Sometimes he was billed as an Alien Laugh Form who crash lands in the backyard of the Tanner family (no, not them) after his home planet, Melmac, explodes. The original series lasted from September, 1986 to March, 1990 on NBC, with a total of 102 episodes in four seasons, plus a movie released on February 17, 1996, to wrap up the series. The show was produced by Alien Productions, the production company of Patchett and Fusco (in syndication the show was distributed by Lorimar-Telepictures, then Warner Bros. after they acquired L-T in 1989).

As is typical of the Alien Among Us plot, ALF has to deal with the particular customs of living on Earth. In a subversion, however, he is not depicted as particularly advanced or powerful. He's a little freaky teddy-bear monster, who is lazy, gluttonous, and tries to eat the family cat (cats were his home world's equivalent to chickens). He hides out in the attic, and makes no attempts to ever leave the housenote Except for one time when he was driving a car, perfectly content to freeload off the family patriarch, Willie, and tease the Nosy Neighbor Raquel Ochmonek.

The show unexpectedly ended on a season cliff hanger, with ALF being taken off to an undisclosed location by government agents. A later Made-for-TV Movie would reveal the result and provide closure for the series. Despite being relatively formulaic, the show was original in many regards, and had a loyal following.

While viewers saw a delightful, lighthearted sitcom, the show is noted for having been very grueling for the cast, and a hotbed of tension and discomfort when the cameras were off. The technical demands of the ALF puppet required a myriad of trapdoors on set, which had to be reset many times during even a single scene. This led to the show being shot in a very halting, piecemeal fashion, with a single 30-minute episode sometimes taking 20-25 hours of studio time to complete. The effects on the cast were devastating; for example, Andrea Elson (Lynn) suffered from depression and bulimia during the series, while Max Wright (Willie), both physically exhausted and resentful of playing straight man to a puppet, reportedly left the studio immediately after the final shot of the series finale, without even saying goodbye to fellow cast members.

An Animated Adaptation co-produced by DiC Entertainment and Saban Entertainment alongside Alien Productions was broadcast from September, 1987 to January, 1989, also on NBC. It depicted Gordon's life on Melmac before he came to earth. It introduced Gordon's family members and friends, such as little sister Augie and girlfriend Rhondanote the latter of whom was first mentioned in the sitcom (both voiced by Paulina Gillis). A villain threatening Melmac was also introduced to add some tension. He was called Larson Petty (a pun on petty larceny). The show had its own Spin-Off, ALF Tales, which had the characters as Animated Actors performing modernized versions of classic stories.

There was also a comic book adaptation from Marvel Comics (for most of the comic's run, it went under their "Star Comics" banner) which tended to play down the sitcom aspects in favor of a lot of parody and a bigger sci-fi slant, giving ALF strange technological toys which would occasionally be useful but most often wreak havoc in unforeseen ways. In many ways, it seemed more inspired by the Animated Adaptation than the original sitcom, and would in fact often include stories set on Melmac, featuring many of the same characters as in the cartoon (most prominently the Shumway family). These stories usually included a framing story of ALF telling the Tanners of life on his home planet — Willie and Kate, for some unexplained reason, found these flashbacks incredibly tedious, while Lynn was fairly indifferent to them. Brian initially loved them, but towards the end of the series started to get tired of them.

ALF was voiced and performed by Fusco. Recently, the character has been resurrected in various capacities; in 2004, a late-night talk show format (called "ALF's Hit Talk Show"; it only lasted seven episodes) and in commercials during the late-1990s, most notably one for the long-distance service "10-10-220". There's also a feature film in the works.

On August 1st, 2018 Warner Bros Television announced they were developing a reboot of the series. The reboot was aborted in November 2018 as Warner Bros. stated they could not find any network who would buy the program. In February 2022, Shout! Factory announced the acquisition of the rights, with plans to release the series (along with the animated spin-offs and Project ALF) on Blu Ray with many of the original scenes cut from Syndication restored.

Alf quickly gets ahold of the guest list for the Tanner's party and convinces them it's a Costume Party so he can finally talk to people.

Example of:
For Halloween, I Am Going as Myself

Alf quickly gets ahold of the guest list for the Tanner's party and convinces them it's a Costume Party so he can finally talk to people.