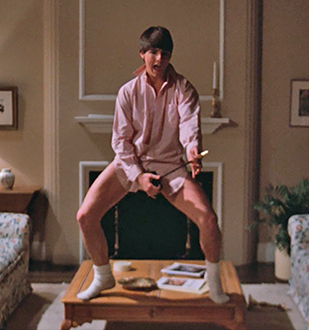 Just take those old records off the shelf...

A character who is home alone dances around like a fool, singing into a hairbrush and dressed in only his underwear or, if the writers are directly parodying the signature scene from Risky Business, then it will be the button-down dress shirt, "tighty-whitey" briefs, and socks. Bob Seger's "Old Time Rock and Roll" (or a parody/soundalike of it) can be used, but not always. Usually a celebration or declaration of freedom, but sometimes just a way of showing that a character is having goofy fun. Very common right after a character has scored a date with their longtime crush. Named for the famous scene of Tom Cruise dancing in his underwear in Risky Business. A frequent addition for comedy is for someone to walk in on the person re-enacting the scene or for the character to slip and fall while trying to slide into frame.

See also Dancing with Myself, and Happy Dance (and contrast Angry Dance, which is more likely to pastiche Footloose).

Twistin' the Night Away

When things are at their darkest, pal, it's a brave man who can kick back and party.

Jump (For My Love)

Twistin' the Night Away

When things are at their darkest, pal, it's a brave man who can kick back and party.

Jump (For My Love)