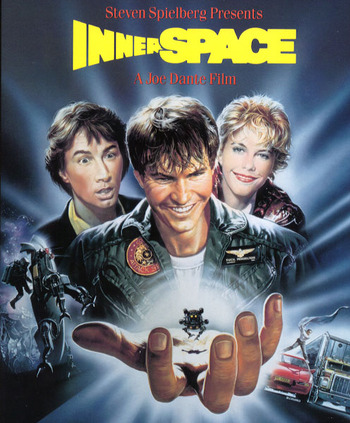 An adventure of incredible proportions.
Tuck: Jack, excuse me, but I want you to factor this into your thinking, all right?... If you don't help me, you're going to wind up with this miniaturized submersible pod floating around your insides with this teeny tiny human skeleton at the helm.
Jack: Ugh.
Tuck: Not a pretty thought!
Advertisement:

A 1987 sci-fi comedy starring Dennis Quaid, Martin Short, and Meg Ryan. Rather surprisingly not the huge hit it was anticipated to become at the time, it has since attained Cult Classic status as one of the quintessential '80s popcorn flicks.

Tuck Pendleton (Quaid) is a U.S. Navy aviator assigned to pilot an experimental submersible pod which is to be shrunk down to miniature size and injected into a rabbit. Unfortunately, bad guys after the shrinking technology break into the lab, and one of the scientists, after escaping with the syringe containing the shrunken sub with Pendleton in it, is forced to inject Pendleton into the nearest available subject... namely, unwitting Safeway grocery clerk Jack Putter (Short).

Then things get weird. (Well, weirder.)

The film was directed by Joe Dante, produced by Steven Spielberg and features special effects by Rob Bottin, which might help give you an idea of what you're in for.

Not to be confused with cult classic PC game Operation: Inner Space or the long closed Disneyland ride Adventure Thru Inner Space.