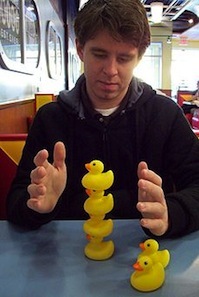 Randall playing with some ducks.
Advertisement:

Randall Patrick Munroe (born October 17, 1984) is an American blogger who began his professional life as a NASA roboticist. He was born in Eaton, Pennsylvania, and attended college at Christopher Newport University (CNU) in Newport News, Virginia. He was an independently-contracted roboticist at the NASA Langley Research Center in Hampton, Virginia for a period of time extending both before and after his graduation from CNU, but in October of 2006 NASA did not renew his contract.

What does he do now? He writes xkcd.

With a sardonic, punny wit and intricate knowledge of many areas of science and computer programming, Munroe utilizes a simplistic, stick-figure artwork style to deliver nerdy punchlines and communicate odd scientific trivia in his writing — not just in xkcd, but What If? and his own personal blog as well

. He has also spoken at TED Talks and released four books: xkcd volume 0, What If?, Thing Explainer, and How To.