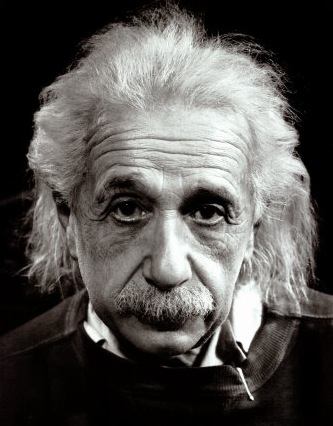 The man who shaped the whole Twentieth Century.
"Unthinking respect for authority is the greatest enemy of truth."
— Einstein, 1901, in a letter to Jost Winteler
Advertisement:

Theoretical physicist, patent clerk, statesman, philosopher, amateur violinist, father of modern physics, superstar, one of the smartest humans in history, and the most famous scientist of the 20th century. Albert Einstein (March 14, 1879 — April 18, 1955) was single-handedly responsible for pretty much every genius-related trope in 20th-century/21st-century media: the brilliant yet witty and genial old man, the fly-away hair, the mild loopiness and absent mindedness, etc, etc.

Born in Ulm, Germany, Einstein was the son of an engineer. He was gifted in math and science from an early age. The urban legend that he failed mathematics in high school is completely untrue. He did fail the entrance examination to the Federal Institute of Technology in Zürich first time around, but that was because the exam was in French, a language he read poorly.note Which must have been infuriating for him, since Zürich is a German-speaking city and German was the language of instruction at the Institutenote On the other hand, Wernher von Braun did fail ninth-grade algebra, so you can use that to cheer your kid up about bad grades if you like. Thomas Edison and Stanley Kubrick also did poorly in school, so they're also good for encouragement. He first started thinking about relativity at the age of 16, as he tried to imagine how a light wave would look if he traveled with it at the speed of light.note The idea of relativity was sort of "in the air" when Einstein was growing up in The Gay '90s, as the similarly-multitalented Austrian Ernst Mach was articulating it at the time. There is no question, however, that Einstein's contributions were revolutionary

After graduating, a friend got him a job at a patent office, a quiet post that gave him plenty of unsupervised free time to work on physics. Nothing special happened until 1905, dubbed Annus Mirabilisnote "Wonderful Year", when he published four papers, in which he explained the photoelectric effect (which eventually got him a Nobel prize, and provided a major breakthrough in quantum mechanics), Brownian motion (which proved the existence of atoms once and for all—a scientific mystery that has been around since the days of classical Greece), special relativity (a theory explaining the previously observed fact that light travels at the same apparent speed regardless of the speed of the observer, which predicts some bizarre consequences, like that two observers moving relative to each other will not agree on how quickly time passes), and matter-energy equivalence (where we get the equation E = mc2)note Simply put, energy is matter, matter is energy. Matter is kind of like concentrated, solid energy. Needless to say, the papers had a revolutionary impact on science, most notably kicking off the age of nuclear energy.

In 1916, Einstein published the Theory of General Relativity, where he unified Newton's theory of gravity with special relativity; he postulated that gravity is not a force, but simply a curvature of the space-time continuum created by a massive object. The theory predicted the existence of black holes, higher dimensions, wormholes, and the possibility of time travel (sci-fi writers know who to thank).

Einstein left Germany for the US during the early rise of Nazism, where his Jewish heritage made him an easy target. In 1939, he signed a famous letter

to Roosevelt supporting the opening of research into the atomic bomb. Einstein was never involved in the Manhattan Project because the FBI was deeply suspicious of his staunch pacifism and supposed "communist sympathies"; during the Cold War, the FBI kept very close tabs on him and even considered kicking him out of the country. In fact, he had almost nothing to do with the letter: It was written by Leo Szilard in consultation with fellow Hungarian physicists Edward Teller and Eugene Wigner, and they asked Einstein to sign it only because his famous name would draw attention.

In the US, Einstein became something of a pop culture icon, with newspapers and reporters beating a path to his door. He also became something of a star amongst children, who wrote him thousands of letters about all manner of topics. Einstein was an influential member of the civil rights, pacifist, socialist, and Zionist movements; David Ben-Gurion even offered him the (mostly ceremonial) post of President of Israel (its powers are similar to those of the British Monarch). He turned it down (much to Ben-Gurion's relief, as a pacifist saint is not exactly something that a fledgling nation beset by enemies needs), and the post went to Chaim Weizmann (himself a scientist).

Einstein died in 1955. He spent most of the time after his arrival at the United States attempting to explain the then-modern physics with field theories. He never believed in quantum theories and remained their opponent until his death (see "God does not play dice"). The task was completed more than 10 years after his death in 1967, with the introduction of the Standard Model

No relation to actor Albert Brooks, who was born Albert Lawrence Einstein, and his brother Bob Einstein.