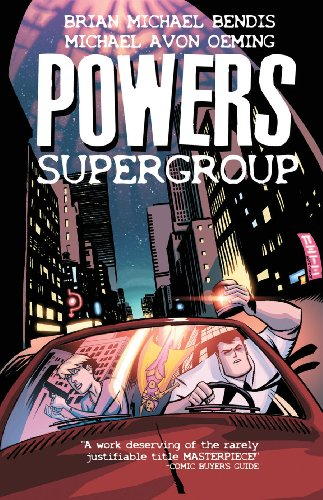 To protect and serve... in a world of capes.
See Magic and Powers for the similarly-named index page.
Advertisement:

Somewhere tonight in the back alleys of this big, bad old city, a superhero and supervillain are going to fight. One will win and one will lose, and maybe die in the process. Or the body of a famous Cape is going to be found under mysterious circumstances, with no sign of how they were killed. Or a trio of superpowered mooks will commit a crime. And somewhere, some poor schmoe of a cop is going to be woken up to investigate the whole thing, type up all the reports, and realize that he's not being paid nearly enough for what he's doing when he faces down a villain who just laughs at him when he draws his gun on them.

A minor Deconstructor Fleet taken to Super Hero Comics, Powers looks at the world of superpowered crime, life and death through the eyes of two non-powered detectives who investigate crimes committed by and related to superheroes and villains. These investigations frequently lead Detectives Christian Walker, note  Who at one time was a powerful superhero before losing his powers prior to the start of the comics. and Deena Pilgrim, note  A spunky female partner with very serious anger and control issues into the seedier side of superpowered life, sex, messed up group dynamics and relationships, and the culture that surrounds it, including everything from trashy tabloids obsessed with the Powers to the bureaucratic nightmare that lies at the heart of the multiple government agencies they often have to deal with.

This one is probably not for the kiddies, as nudity, death, foul language and brutal, crippling beatdowns are guaranteed in virtually all of the (so far) dozen paperback collections.

A TV adaptation starring Sharlto Copley (District 9, Elysium, Maleficent) as Christian, Susan Heyward (The Following) as Deena, Michelle Forbes (The Killing) as Retro Girl, Noah Taylor (Game of Thrones) as Johnny Royalle and Eddie Izzard as Wolfe was made by the PlayStation Network in 2015. Its page can be found here.