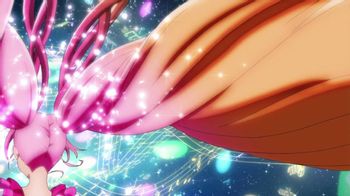 ...and braids it, too!
"And can I just ask, what's with the Make-Over of the Damned? I mean, the hair...!"
— Xander on Dark Willow, Buffy the Vampire Slayer
Advertisement:

You've just got a power boost. The reasons may vary, whether it's from going into Super Mode, your Superpowered Evil Side deciding to wake up, you finally got your hands on that MacGuffin you've been after, you Came Back Strong whatever. The point is, you're now capable of destroying the world three times over, and you can feel it.

Power Dyes Your Hair is Exactly What It Says on the Tin: a Power Makeover that dyes hair. The degree in which this happens can vary; on the one hand, a character may only have their hair change a few shades, especially if their hair's already light to begin with. Other times, a character may go straight from having black hair to blonde or white. Often, this is a good way for a character to maintain a Secret Identity, as the change isn't permanent. Bonus Points if Power Makes Your Hair Grow. May also result from Paint It Black, if the power surge isn't a positive thing for the heroes.

After getting struck by Elsa, Anna's hair begins to gradually turn white.

After getting struck by Elsa, Anna's hair begins to gradually turn white.