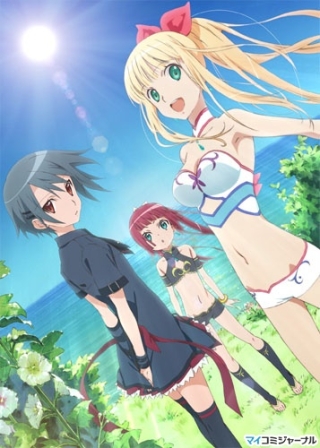 Originally a pachinko game series, Umi Monogatari (Sea Story) was given an anime adaptation by ZEXCS in the summer of 2009 with the subtitle Anata ga Ite Kureta Koto (That You Were There for Me). It was directed by Junichi Sato.

Under the sea, two mermaid sisters by the name of Marin and Urin are enjoying their lives. One day, a ring falls from the surface and into Marin's hands. She wants to find the ring's owner and return it, and takes Urin along for the ride. It's then that they run into Kanon Miyamori, a young priestess who's about to get involved in a series of events neither she nor the sisters could've planned for when Urin ends up unleashing Sedna, an evil force intent on shrouding the world in darkness. This is what prompts Marin and Kanon to become the Priestess of the Sea and Sky.

Umi Monogatari is unusual among Magical Girl Warrior shows in that the focus is more on emotional development of the characters, the fights are fairly long, the girls' mentor is completely wrong about some things, most of the music is gentle piano music, and The Reveal of what the Big Bad really is allows for a conclusion that's more true to life than most shows of this nature.

Not to be confused with the Monogatari series.

Tropes in Umi Monogatari include: