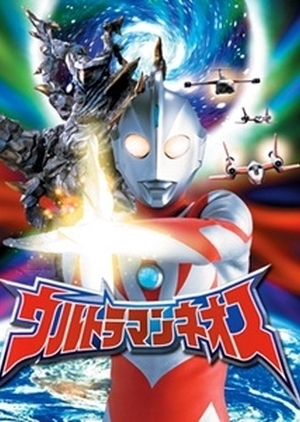 Ultraman Neos is a tokusatsu Direct to Video entry to the Ultra Series that was released from November 1999 to January 2000.

Every three million years, the Solar System passes through a place called the Unbalanced Zone. At the dawn of the 21st century, as the Earth's population rises, the Solar System passes the Unbalanced Zone once again, where Dark Matter starts the appearance of monsters. Genki Kagura of the Hi-Tech Earth Alert and Rescue Team (HEART) is working with a space team when meteorites pummel a satellite that's being operated on. Kagura saves the team just as the satellite explodes, ejecting him into space. Miraculously, he survives and later rejoins his team to investigate a rockslide incident that might be related to the appearance of Japan's first monster.

When the monster, Aranagaruge, appears with Nana Hayami, a child, and his dog endangered, Kagura must access the memories he lost while drifting through space and learn the origin of his survival. He would later fight monsters made of Dark Matter, occasionally assisted by Ultraseven 21 (Pronounded "two-one")

Ultraman Neos was originally supposed to be the back-to-basics entry that revived the Ultra Series in the Heisei era. Since the network wished for a more original series, Ultraman Tiga was created. Most of the ideas brought up in the pilot were used for Tiga, Dyna, and Gaia, so Neos felt a bit So Okay, It's Average by the time it was released.