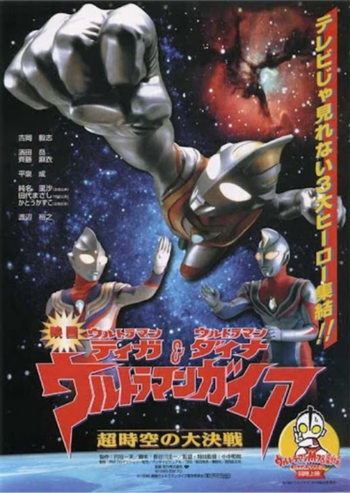 The Japanese poster with the Overly Long Title. Note that there's a reason why the title card of Gaia is three times bigger than the title cards of Tiga and Dyna combined.
Advertisement:

In a change of pace from the usual formula, Ultraman Gaia: The Battle in Hyperspace is a Real World Episode in which an Ultraman travels to a mundane universe where the Ultra Series is a work of fiction.

When a child named Tsutomu Shinsei, whom is a hardcore fan of Ultraman (especially Ultraman Gaia) comes across a mysterious red ball after a Prophetic Dream, which can seemingly grant his wishes, he immediately wishes to meet Gamu Takayama, the hero and human host of Ultraman Gaia. Sure enough, Gamu gets transported from the Ultramen's fictional universe into our reality, but unfortunately the wish also brought along monsters from Gamu's world. And to make things worse, bullies from Tsutomu's class have found the magical wish-granting ball, and intends to use it for their own selfish purposes...

Tropes related to the kaiju antagonists are already on the series' character page.

Ultraman Gaia: The Battle in Hyperspace provides the following tropes.