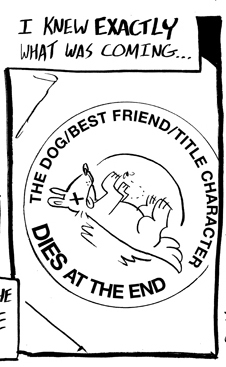 "The dog always dies. Go to the library and pick out a book with an award sticker and a dog on the cover. Trust me, that dog is going down."
— Wallace Wallace, No More Dead Dogs
Advertisement:

There is a Slice of Life story about childhood and coming of age. The main character has a best friend (an animal, another child, or a family member) who is a source of joy, wisdom, and understanding in their life. This friend is often frailer, more unworldly, or otherwise more "special" than The Protagonist. Bonus points if the character is cute or adorable.

At the end of the story, this very special best friend is abruptly killed off, usually in a clear-cut case of Diabolus ex Machina. A favorite trick is to have the death happen entirely off-screen. The more horribly poignant, the better.

All this is generally accompanied by lots of "end of the innocence" angsting from the main character, along the lines of "That was the day my childhood ended..." Really, it's just the author's way of having a child suddenly make the jump to adulthood via a single defining tragedy.note This can be justified in that the average lifespan of a typical dog is around eleven to twelve years. Since it's not recommended to get a dog until the child is around five or six, this would result in the dog dying when they reach their late teens. It also matches the typical age when someone is attending school.

The Newbery Medal is a prestigious award given to American novels written for children. Even a nomination without a win (called a Newbery Honor) can net your book a healthy amount of prestige. To win one, it helps a lot to use a story like this. The British equivalent is the Carnegie Medal, which has a similar reputation.

Bridge to Terabithia won a Newbery for its handling of the topics embodied by this trope. Thirteen years later, Shiloh may have won its medal because it didn't go for the easy win by killing off the dog at the end (there were still three sequels to be written, after all).

This trope is so pervasive, some readers expect that the most lovable character won't get to see the end of a critically acclaimed work of fiction. They're Too Good for This Sinful Earth, after all.

Remember, one reader's predictable, Narm-filled Award Bait can be another's Heartwarming Childhood Classic that will always hold a special place on their bookshelf.

Compare Death Is a Sad Thing (where youngsters are taught about death), Oscar Bait (which often employs the same principle), True Art Is Angsty, The Plot Reaper, and Manic Pixie Dream Girl (not a coming of age, but the character of spirit, spunk, and unconventional wisdom is very likely to die by the end). Contrast Dog Got Sent to a Farm, when adults avoid telling children the truth about death.

This trope is about a character's death as a critical aspect of the storyline they're in. Any instances where a character is killed with an actual Newbery Medal should go to Improvised Weapon (or Once Killed a Man with a Noodle Implement if it's not shown). Also, do not confuse with a medal awarded for dying from a newbie ("newb") mistake.

And see these two AV