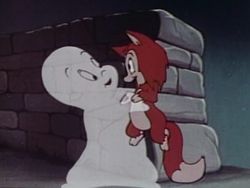 Oh... some animal dies...
"Now...isn't this a perfect setting for a spine tingling ghost story? Well, strangely enough, this is a ghost story. Do you scare easy? Do shadows on the wall frighten you? Well, relax — this isn't that kind of a story. And just to prove it, let me introduce a ghost that is out of this world. His name is — Casper."
Advertisement:

The second and easily the best-known short in the Casper the Friendly Ghost cartoon series, There's Good Boos Tonight, a 1948 Famous Studios short is a popular, nostalgic classic among many classic cartoon viewers — and quite a Tear Jerker at that.

The short was directed by Isadore Sparber, animated by Myron Waldman, Morey Reden and Nick Tafuri, and written by Bill Turner and Larry Riley, with background art by Anton Loeb, music composed by Winston Sharples, and narration by Frank Gallop.

The plot of the short is centered on Casper, who resides at a graveyard, uninterested in joining the activities of his brethren as they fly off to scare people. Seeing no future in that life, he leaves the graveyard to make friends with the local animals. He's not too successful in doing so until he finally does find a friend in the form of Ferdie, a fox who isn't scared of him like the others. Casper promptly bonds with it, but all is not well, as a fox hunter makes his rounds...