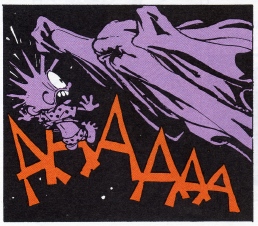 Hobbes can make anything scary.
"Well, while I can appreciate your classic look, I don't think anyone has been scared of the 'bedsheet phantasm' ensemble for a long time."
— Antimony to Mort, Gunnerkrigg Court
Advertisement:

Our Ghosts Are Different, and they look like refugees from the linens aisle.

If ghosts in Western media aren't dressed as the deceased did in life, then chances are they're dressed as the deceased did in death. Originally, this meant grave clothes and a long, white, flowing burial shroud. If the same reasoning were applied to modern burial customs, it would mean that most ghosts would dress in their Sunday best, but the trope is seen as too cheesy in the present day to be updated in such a logical manner.

Like many images common to modern culture, the Bedsheet Ghost began as a theatrical convention that has long lost its context. In Shakespeare's day, it was common to portray ghosts in armor on stage (this is why Hamlet's father is often depicted in a full suit of armor in historical depictions.) In Elizabethan England, armor was no longer worn in combat, and the costuming convention at the time was to dress characters in contemporary (Renaissance) clothing. So, by dressing a character in armor, the character was given an out of date look, and recognized as a ghost. However, as special effects became more elaborate, it became common to lower the actor playing the ghost onto stage with a pulley. Of course, the heavy armor clanked loudly, and by the 19th century, the sight of an armored ghost on stage was more likely to bring laughter than fear.

Because of this, by the 1800s, theatres realized they had to create a new, recognizable look for ghost characters, one that would allow the actor to enter and leave silently. Perhaps inspired by traditional burial shrouds or depictions of ghosts as ethereal, misty creatures (both attributes predating the Bedsheet Ghost), actors began to appear draped in white cloth to portray ghosts.

Over time, as the shroud became emblematic of the ghost, ghosts were depicted as less corporeal by showing the shroud without a body underneath it. Some stories even go one step further by showing the ghost as a wispy blob of ectoplasm, vaguely shroud-like in appearance, à la Casper the Friendly Ghost.

As a result, the white sheet has become pop culture's visual shorthand for spirits of the dead, and a bedsheet with eye holes is the standard costume for fictional characters trying to dress like ghosts. This idea dates back at least to the Post-U.S. Civil War period—the white robes and hoods of the Ku Klux Klan were intended to look ghostly. (This Klan connection, in turn, is why the pointy-headed Bedsheet Ghost is no longer a popular design.)

The Klan aside, dressing up as a Bedsheet Ghost is usually indicative of an ill-conceived or apathetic scare attempt, because on their own, a person in a white sheet really isn't that scary to anyone over 6 years old. Like the armored ghost before it, the Bedsheet Ghost has long lost its fright appeal, and is mostly comical today. This in turn has led to a common subversion: The characters see what seems to be a person in a white sheet, laugh at the obvious costume, and then lift the sheet to see there's no one underneath it. Cue running and screaming. However some have managed to make it somewhat less funny looking and more intimidating, such as putting red paint on the sheet to make it look bloody.

While the Bedsheet Ghost is rarely played straight as an attempt to scare the audience, he can still work as a mournful, sympathetic figure. The imagery also seems to have evolved into the design of ghosts as disembodied cloaks or robes with hooded faces, who still tend to be treated as spooky figures due to the whole "Grim Reaper" parallel.

Definitely Truth in Television for anyone who's celebrated Halloween: If you haven't dressed as a bedsheet ghost at some point, you know someone who has. Unless you're from the Deep South.

Sub-trope of Stock Costume Traits. Compare Jacob Marley Apparel, Ethereal White Dress and Stringy-Haired Ghost Girl (the rather violent Japanese parallel). Not to be confused with a scene wherein a ghost crawls up from underneath the bedsheet and gets you while you lie on the bed. Usually unconnected to Modesty Bedsheet.

No, that's just a costumed Pooh and Eeyore.

No, that's just a costumed Pooh and Eeyore.