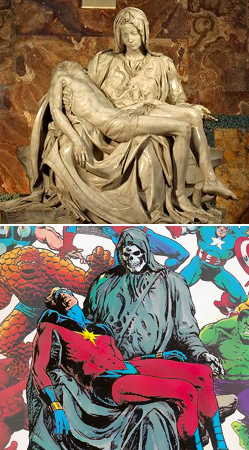 Michelangelo Buonarroti's sculpture depicting Mary holding the body of the crucified Christ is the best-known example of one of the most popular poses in art. There is a whole class of artwork, referred to as "pietàs", that depict Mary (usually seated) holding the dead Jesus, going back to at least the early 14th century. It includes two other pieces by Michelangelo himself—one in the Cathedral Museum in Florence and known as the Deposition or Florentine Pietà, the other one in the Castello Sforzesco in Milan and known as the Rondanini Pieta, as well as a third work in the Academia in Florence not generally attributed to Michelangelo today.

This specific pose is often used either following a Heroic Sacrifice or on a comic book cover, in which case it will likely be accompanied by a Tonight, Someone Dies. It's frequently gender-flipped (i.e. the man holding a dead/dying/comatose woman).

Owes its existence to Pop-Cultural Osmosis.