Film / Rollo and the Spirit of the Woods 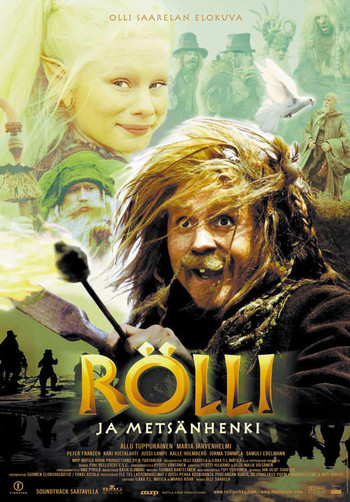 Rollo and the Spirit of the Woods (Finnish: Rölli ja metsänhenki, also titled Rolli) is a 2001 Finnish fantasy film directed by Olli Saarela. It is the second film based on the children's television character Rölli, with the first being Rölli – hirmuisia kertomuksia (English: Rolli – Amazing Tales) from the year 1991. Unlike Rölli – hirmuisia kertomuksia that was much truer to the TV character, Rollo and the Spirit of the Woods was taken further into the traditional world of fantasy and adventure.

A tribe of hairy and rowdy troll-like creatures called rolleys (röllit) have sailed to find a new home. They beach in a lush and beautiful land, finding in the forest a village inhabited by peaceful elves (menninkäiset). Scared by the dirty strangers, the elves retreat from their village, and the rolleys take it as their new home. When everything seems to look fine for the tribe, the Old Chief decides it's his time to leave this world and departs, leaving his leadership position open for the rolleys to compete over. It's during these turbulent times that the elves gather up the courage to meet with the rolleys and offer friendship. Unfortunately, with the tribe being directed by the glib adviser Lackey (Lakeija), the rolleys aren't willing to share the village and drive the elves away.

The brave elf girl Millie the Elf (Milli Menninkäinen) decides to try and make peace with the rolleys. She befriends the kindest rolley known as Rölli (Rölli). The other rolleys aren't pleased with one of their own fraternizing with an outsider, but Rölli and Millie must work together in order to form peace between their peoples, for they learn that the hostility is threatening the balance of the entire forest.