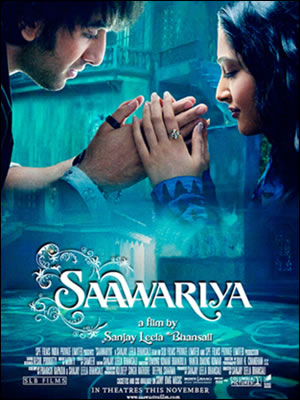 Saawariya was a 2007 Bollywood movie that pretty much crashed and burned with audiences and critics alike. But it also happens to be notable for featuring many tropes.
Advertisement:

The plot centers around Gulabji, a prostitute living in a fantasy city that calls to mind many real world equivalents without being any place in particular. She tells the story of Raj, a newcomer to town who makes everyone happier just by existing. But when he falls in love with the mysterious Sakina, he is dismayed to learn she is in love with someone else.

The film is an adaptation of "White Nights", an early short story by Fyodor Dostoevsky.