Animation / The Return of Hanuman 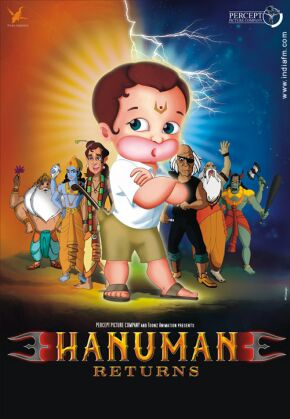 Guess which characters are the villains.
Advertisement:

The Return of Hanuman (previously Hanuman Returns until a few days before its premiere) is a 2007 animated film produced by Percept Picture Company and directed by Anurag Kashyap. The movie is a Spinoff movie of Hanuman, and like its predecessor, the movie is centered on the Hindu god Hanuman.

The story begins as Hanuman watches some children playing at school. Feeling bored of staying in Swarglok for years and looking at how fun the children are having, Hanuman wants to go back to Earth to play with them. With a few conditions, Hanuman was later reincarnated as Maruti, a young boy who shakes things up in the village of Bajrangpur. At the village, he made friends with the bullies' target named Minku and his two friends Munni and Daddu and defend them from the bullies. He also proved that there are no demons behind the large wall by climbing across it. Then a weird staff crashed on Bajrangpur, and a volcano is turned into a monster. In order to save the village, Maruti must turn back into Hanuman.