Western Animation / The Return of the King 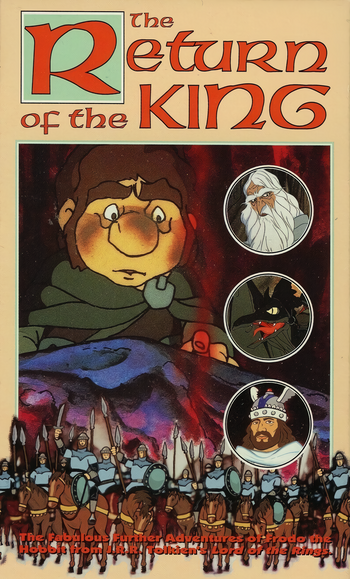 "It's so easy not to try
Let the world go drifting by
If you never say hello
You won't have to say goodbye."
Advertisement:

The third film in a loose trilogy of animated films based on J.R.R. Tolkien's Middle-earth stories, The Return of the King is Rankin-Bass's adaptation of the third The Lord of the Rings volume of the same name. The film serves as a follow-up to their earlier adaptation of The Hobbit, and as a conclusion of sorts to the Ralph Bakshi adaptation of The Lord of the Rings, which covered The Fellowship of the Ring and most of The Two Towersnote due to where Bakshi's film leaves off, if you try to use this film as the conclusion to the story, the difference between the two involves a major "cut", jumping from the end of the Battle of Helm's Deep to the Siege of Minas Tirith, with no explanation of how Gandalf and Pippin got there, as well as the encounter with Shelob being excised, with Frodo suddenly a prisoner of orcs.

The Return of the King: provides examples of: