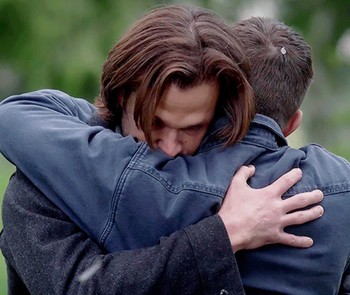 "That is SO SWEET man, how about a bro hug bump?"
— Sweet Bro and Hella Jeff
Advertisement:

Nowadays, in the western world, displays of affection between men are discouraged, on the theory that they are too "girly", or indicative of homosexuality. A congratulatory clap on the shoulder or back? Fine. Shaking hands or bumping fists? No problem. Hugging and kissing? Not so much.

Therefore, when two men hug, it usually indicates that they are close friends, brothers (in blood or in spirit) or trusted comrades-in-arms. This is the Man Hug, also known as Dapping Up.

Usually accompanied by a mutual clap on the back or shouldernote (The general rule seems to be the more physical pain you inflict, the more affection is communicated. Expect the occasional clenched-fist-pat, or pound.), the Man Hug is a show of deep trust and close friendship between two men that cannot be broken easily. It may be a show of comfort, a wordless offer of good luck, or even a gesture of greeting. It is often combined with a handshake, so that two men approach, shake hands, throw the free arm around their partner, briefly bump chests, and separate without any further fanfare. However, this can be part of a more elaborate ritual (see the Metal Gear Solid example, below). Basically this hug says, "Yeah I'm hugging you, but I'm also hitting you." as a way to save face.

On a side note, when you have someone who doesn't follow this trope (usually the Sensitive Guy), he'll usually rush into a low hug, head about belly-button level, and cling like a limpet with the other guy standing stock still and sometimes slowly lowering a hand in a pat-pause-pat rhythm.

Related to Air Hugging. May be a sign that two characters are Heterosexual Life-Partners. Men who aren't afraid to hug also don't tend to be afraid to shed Manly Tears. Subtrope of Handshake Substitute.