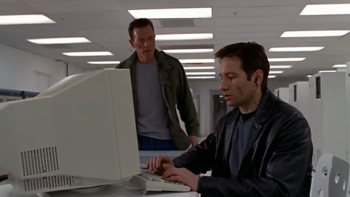 "It's three words: 'Fight the future'."
Written by Chris Carter & Frank Spotnitz
Directed by Tony Wharmby
Scully: So you'll risk the consequences even though there may be nothing here?
Mulder: You don't get it, do you, Scully? The man shot at the White House, the prison escapee, there's something bubbling to the surface here. I want to know what it is.
Advertisement:

Mulder tries to get reassigned to the X-Files, and investigates after a man is killed trying to break into the White House.

"You think this is about Mulder? It's about the truth, John."