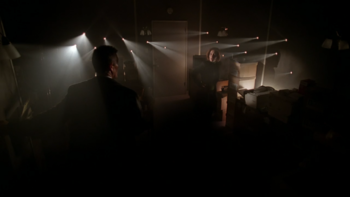 "CHASE did a lot of business with an exterminating company called Triple-A-1 Surekill. Six jobs in one month."
Written by Greg Walker
Directed by Terrance O'Hara
Doggett: Wait, you, you're not saying this guy has X-ray vision?
Scully: I am remarking that these wavelengths exist and the only thing that is stopping us from seeing them, if you will, is the biochemical structure of our eyes.
Advertisement:

Scully and Doggett investigate a shooter who can see through walls.

"Well, if you're suggesting he could see into her heart, Agent, you are out of FBI territory on this one."
Feedback