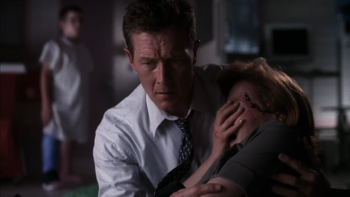 Ladies and gentlemen, our new duo for the "X-Files": Scully and the T-1000.
Written by Chris Carter
Directed by Kim Manners
Scully: Your men are at the hospital?
Doggett: They got it controlled. Nobody goes in or out of that building without them knowing about it.
Scully: HOW DO YOU KNOW THAT THEY'RE YOUR MEN?
Advertisement:

The search for Mulder is complicated by the involvement of a shape-shifting alien bounty hunter.

"Whatever you and I may differ on, I'll find him, Agent Scully."