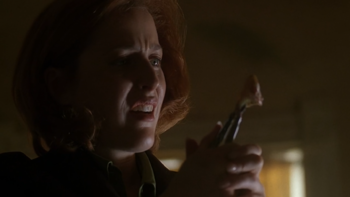 "I think that they put this thing inside of you."
Written by Vince Gilligan
Directed by Rod Hardy
"I get the distinct impression that somebody doesn't want me to leave."
— Dana Scully
Advertisement:

A police department in Utah finds a dead body with unexplainable qualities and contact the FBI for help. Scully doesn't tell Doggett about it and decides to go on her own, brushing it off as a simple consultation. Of course, it isn't. She gets lost in a tiny town a few miles away from her destination, and the citizens seem to not want her to leave - because, as it turns out, they are all part of a strange religious cult and need a new host for the slug parasite they worship.

Scully: I... I left you out of this case, and that was a mistake on my part. It was almost a fatal mistake.
Doggett: It was. You screwed up.
Scully: And I won't do it again.
Doggett: I appreciate it.