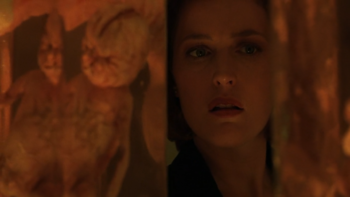 "All my life I wanted children. But I'm afraid of what's growing in me."
Written by Chris Carter & Frank Spotnitz
Directed by Kim Manners
"Ms. Hendershot believes that she is carrying a baby that is not her own. That, by whatever means, at 40 weeks, she is about to give birth to something inhuman."
— Dana Scully
Advertisement:

Scully and Doggett investigate a number of women who apparently became pregnant after being abducted by aliens, in a case with uncomfortable parallels with Scully's own history.

In a series of flashbacks, Scully recalls a time when she attempted to get pregnant by IVF, with Mulder as the sperm donor.

"Never give up on a miracle."