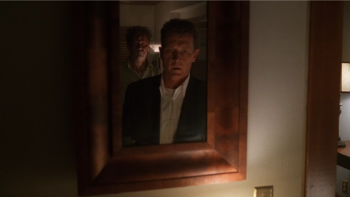 "I'm not sure... I'm awake."
Written by Frank Spotnitz
Directed by Tony Wharmby
"'Via Negativa' - the path of darkness. Tipet believed he reached it. Uh, he believed that the drugs took him inside the subconscious minds of anyone he knew... making the most horrific, irrational dream imagery of their nightmares come true."
— John Doggett
Advertisement:

While Scully is in the hospital, Doggett and Skinner investigate a cult leader named Anthony Tipet (Keith Szarabajka) who may be murdering people in their dreams.

"It was a bad dream, Agent Doggett, but that's all it was."