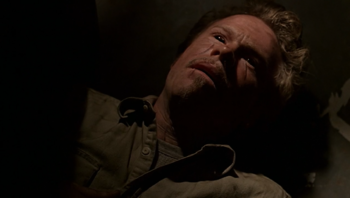 "Tenemos que detenerlos antes que sea muy tarde. Ya vienen! Ya vienen!" Translation "We have to stop them before it's too late. They're coming! They're coming!" in Spanish.
Written by Steven Maeda
Directed by Rod Hardy
Mulder: We got to quarantine this rig.
Scully: No Mulder, you need to get off the rig. Have Agent Doggett give the order. We can quarantine you and the crew when you get back here.
Mulder: Scully, if these men are infected, the last place we want to be is onshore where they can infect other people.
Advertisement:

Mulder and Doggett are forced to come to an understanding after they become trapped on an oil rig where the crew are infected with the alien black oil. Doggett was sent to investigate the oil rig, but Mulder went along on his own initiative, disobeying orders.

"That oil should stay right where it is. You should do everything in your power to make sure that it does."
Feedback

Mulder and Doggett hesitantly take a page out of Die Hard to escape a collapsing oil rig.

Example of:
No Escape but Down

Mulder and Doggett hesitantly take a page out of Die Hard to escape a collapsing oil rig.