It's Quiet Too Quiet 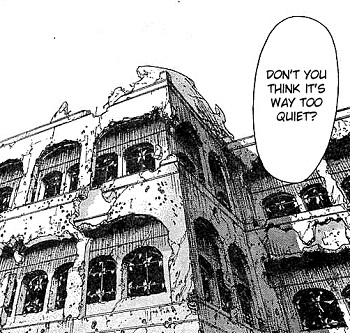 But with all those bulletholes, it must have been quite noisy at one stage!
"It's quiet...too quiet...
[Gunshot. Bullet whizzes past his head]
Now, suddenly, it's too loud. I preferred it when it was quiet."
— O'Malley, Red vs. Blue
Advertisement:

The setting is ominous: a dungeon, perhaps, or a dark wood. Not one where the wary or cowardly tread, that's for sure. The heroes, (no idiots, they!) ready themselves for an enemy attack that could come at any moment. After all, there MUST be danger nearby... right? It seems safe for now, though... or is it?

Someone has to break the silence, and only one line will do: "It's quiet... too quiet."

This trope describes any moment in a narrative where the action has hit a low point when anyone who's paying attention would notice that a Random Encounter could, or should, appear at any instant. Fairly often something will happen within a minute, which will lead another character to say "You Just Had to Say It".

When you start to suspect something is about to happen because the narrative is too positive, rather than too uneventful, that's a Hope Spot.

The Stock Phrase itself is long since discredited and made fun of so often it can now be considered a Dead Horse Trope. Exception is made if it is lampshaded by adding in a sign on WHAT is quiet, e.g. "Why have all the forest noises stopped?" the answer usually being "the Monster of the Week killed/drove away all the wildlife". Compare We're Being Watched.

Compare Nothing Is Scarier and Absence of Evidence. For the background music going silent, see Sudden Soundtrack Stop. For when a person going quiet is a bad sign, see Lost Voice Plot, Dumb Struck, and Silence of Sadness.

At least partially Truth in Television; in forests and crowded cities, there's always stuff making noise — insects, birds, etc... unless they're hiding from something.

Alternative Title(s): All Too Easy