Literature / The Hounds of the Morrigan 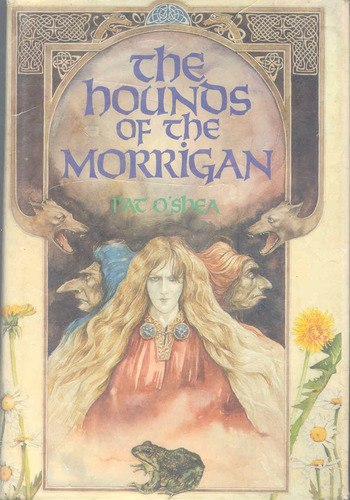 All who are true creatures will help where they can. As to the hounds, when they hunt—do not run.

The Hounds of the Morrigan is a fantasy novel from 1985, written by Pat O'Shea. It's big, it's whimsical, and it contains more references to Irish Mythology than you can shake a stick at. The very plot itself revolves around the Celtic Goddess of War trying to absorb an ancient demon into her soul so that she becomes unstoppable.

Pidge—Patrick Joseph, in full, but everyone calls him Pidge—is an ordinary-if-bookish ten-year-old boy living in the Irish countryside with his little sister, father, and aunt. One day, while biking through the city, he stumbles upon an old bookshop and finds an ancient tome. On one page is a drawing of a horrible serpent, the very image of which itself fills him with dread. Meanwhile, one of his neighbors rents out his spare greenhouse to a pair of beautiful but sinister women who ride around on motorcycles, who claim to be artists. The two are indeed related: That night, the Dagda, the God of all that is good, tells him that the book contains the serpent Olc-Glas, a horrible beast imprisoned there long ago. The two old women are Macha and Bodbh, and are part of the Morrigan—the Goddess of War and Discord and Death herself. They are out looking for the serpent themselves, because, if they add his poison to theirs... Well.

Olc-Glas is too powerful to be dissolved by anything but the Morrigan herself. But there is a way: Long ago, the great hero Cuchulain spilled a drop of her blood onto a pebble. If they can find that pebble, with its single drop of blood, they can use it to destroy Olc-Glas. But if the Morrigan finds it first, not only will she stop them from destroying the serpent, she'll get him for herself.

The Dagda chooses Pidge and his little sister Brigit to find it, on the grounds that they are brave enough, and clever enough, and alone true enough to do what is right instead of trying to use the serpent's power for themselves. But the Morrigan and her sisters have sent their dastardly hunting hounds after the two siblings, as they brave the world of Celtic myth in search of the stone. Luckily, all creatures good and light are looking out for Pidge and Brigit. But is it enough to keep the hounds away until they can find the pebble and destroy the serpent?

Despite its great (almost 700 pages!) size, the book is told in a lyrical fairy-tale style generally geared at children (and anyone who loves a good yarn). It contains Nightmare Fuel and Sweet Dreams Fuel in equal measure, though it remains firmly on the "idealistic" scale of the Sliding Scale of Idealism Versus Cynicism.