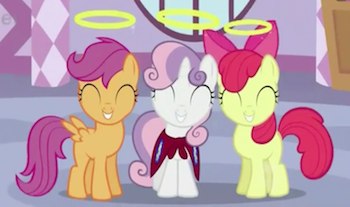 Cause trouble? You mean these sweet little angels?
Scootaloo: We are the Cutie Mark Crusaders!
Apple Bloom: And we wanna crusade for our cutie marks!
Sweetie Belle: And we... um... yeah, what they said!
Written by Chris Savino
Advertisement:

Rarity's got a big order to fill at her boutique, and her little sister Sweetie Belle keeps getting underhoof. Fluttershy shows up to drop off a freshly-groomed Opalescence, but things get hectic again when Apple Bloom and Scootaloo show up for the big Cutie Mark Crusader Sleepover the girls have been planning, and Sweetie Belle shows off the capes she'd made for her and her friends. Unfortunately, said capes were made with the special gold fabric Rarity had been using, forcing the frazzled unicorn to pull an all-nighter to get the order done, and preventing her from chaperoning the sleepover. Fortunately for the CMC, Fluttershy volunteers to let them stay at her house, despite warnings from both Rarity and Twilight that the Crusaders might be more than Fluttershy can handle.

Advertisement:
Fluttershy: I'm the world champ, you know. I bet you can't beat me! (grins sheepishly and then holds her breath)
(Beat)
Scootaloo: I lose!
Sweetie Belle: Me too!
Apple Bloom: Me three!

Finally, Fluttershy tries to put the Crusaders to bed with a lullaby, but Sweetie Belle insists in joining in, and as good a singer as Sweetie is, her version is rather more energetic and a good deal louder, loud enough to startle Fluttershy's chickens out back. The Cutie Mark Crusader Chicken-Herders try (and fail) to round up the birds, and Fluttershy is forced to use "The Stare" on the chickens to subdue them and get them back in the coop.

Later that night, the Crusaders are just settling down for bed (or so they let Fluttershy think), when they notice one of Fluttershy's chickens has broken loose and wandered off...into the Everfree Forest. They sneak out to chase down the wayward chicken, but Fluttershy quickly discovers they're gone and tries to track them down. Then Fluttershy runs into Twilight, who had earlier gone to visit Zecora...only to discover her Unicorn friend has been turned to stone!

Turns out there's a cockatrice on the loose. When Fluttershy tries to warn them, however, the Cutie Mark Crusaders are dismissive of the beast based on its silly-sounding description.

Apple Bloom: Why, if I ever saw one of them cock-a-thingies face-to-face, I'd laugh at how silly it was!

They quickly change their tune after witnessing the beast turn its petrifying powers on Fluttershy's chicken... followed by it going after them! Fortunately, Fluttershy is able to use "The Stare" to not only scare off the beast, but brow-beat it into turning Twilight and the chicken back to normal, earning her the respect and gratitude of the Crusaders after saving them. The next day, all is well, Fluttershy has learned her lesson about biting off more than you can chew, and Twilight has learned once again not to underestimate Fluttershy.