It's the Best Whatever, Ever! 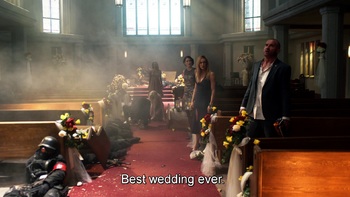 A line used in kids' shows, sitcoms, and kids' sitcoms, at the beginning of the episode, just before Hilarity Ensues.

The characters will be discussing whatever the subject of the episode is and someone will say, "This is gonna be the best (whatever) EVER!" Then, everything goes horribly wrong, but of course later they realize that it didn't go SO badly after all. "It really was the best (something) ever!"

Not to be confused with Most Triumphant Example, which is your Personal Favorite Whatever, Ever. Contrast with Worst. Whatever. Ever!.

SpongeBob performs a concert with his friends about enjoying his "best day ever".

SpongeBob performs a concert with his friends about enjoying his "best day ever".