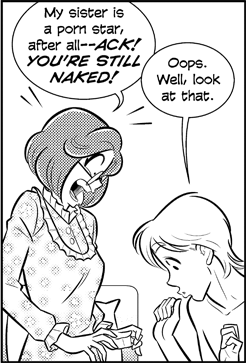 A wacky romp, usually full of fanservice, blunt innuendos, and simple plans all to one purpose — to get laid! Expect tons of Gag Boobs, humorous dating or hook up scenarios, and maybe a large dollop of Virgin-Shaming, or Sex as Rite-of-Passage if he still is. These can be explicit or non-explicit. The hijinks don't have to end after our hero or heroine gets laid.

Many long-running sitcoms aimed at grown-ups will have an episode of sex comedy sooner or later, sometimes featuring an attractive visiting character or guest star who catches the attention of one or more of the primary cast.

May occasionally overlap with Romantic Comedy. May be a cause of Best Known for the Fanservice. Compare Ecchi. Subgenre: Awful British Sex Comedy.