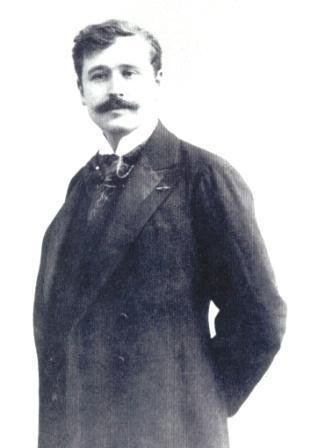 Georges Feydeau (8 December 1862 – 5 June 1921) was a French playwright, specializing in Farce. He certainly didn't invent the genre, which is Older Than Feudalism, and he was working in an established French tradition, but he has a fair claim to be one of its greatest exponents and to have perfected some of its features. His plays are masterpieces of farce plotting, full of wild coincidences, misunderstandings, Fawlty Towers Plotting, Door Roulette and sudden surprises. They were created purely as entertainments, with no messages (beyond a little occasional mockery of current fashions) or intellectual subtlety, but their wild anarchy sometimes gets them called precursors to Surrealism.
Advertisement:

They are also often examples of Sex Comedy, with the plots driven by attempted adultery and character lechery. Hence, Feydeau can take some of the credit or blame for the English-speaking world's image of France in The Gay '90s and The Edwardian Era as being especially naughty. Feydeau was a man of his time, though, which can lead to a little Values Dissonance for modern readers of some of his plays. But they work, and some of them are still regularly produced today.

Feydeau was a great success in his time, in France and abroad, but enjoyed the Parisian high life that was the setting for many of his plays, which caused him some financial difficulties. He died, with perhaps some vicious irony, of syphilis.