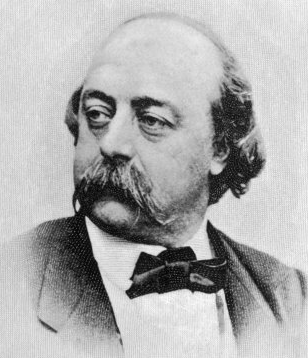 "One must not always think that feeling is everything. Art is nothing without form."
"Madame Bovary, c'est moi!"

Gustave Flaubert (1821-1880) is known today by many labels that he would despise today: his realism, a term he was always skeptical and ambiguous about, his harshness to his characters (despite the fact that he famously stated that he identified with his characters to a painful degree) and for his dry realist setting despite his obsessive, fevered imaginings of the Ancient World in his historical fiction.

Flaubert's writing style is famous for its economy and its precision. There are very few words wasted on scene setting, character description and plot. He had an eye for sociological and psychological detail and a very distinct tone of narration which, while striving to erase sentiment towards characters, also often carried with it a highly ironic and witty personality, far from the scientific and sociological approach of his disciples and imitators. He was also one of the first writers who put a high weight on style, correct discipline of writing and was famed for obsessing over "le mot juste". He was noted for his obsessive research into background and history, in a way becoming a precursor to James Joyce who always cited Flaubert as one of his favorites.

Madame Bovary of course is his most famous, widely read and influential work. When it was published in serial form, the suspected lurid nature of the story, a fairly non-judgmental telling of a wife committing adultery, provoked controversy and Flaubert was called to trial where he defended his work. After being cleared, the book was subsequently published and became a success partly out of scandal and partly out of literary merit. Largely due to Small Reference Pools, Madame Bovary remains Flaubert's most famous book with his follow-up works Salammbô and Sentimental Education not being as well-known today, though the former was a classic for the 19th Century.

Because of his obsessive research and extended writing time, Flaubert only completed three novels in his lifetime. In addition, he wrote a collection of short stories Three Tales and a fevered Verse Drama The Temptation of Saint Anthony that examined religion and philosophy on the line of Goethe's Faust. He wrote letters regularly throughout his life and collected editions of his letters are highly prized by writers. After his death, his posthumous works Bouvard et Pecuchet and The Dictionary of Received Ideas have also gotten their due.

Other works by Flaubert contain examples of: