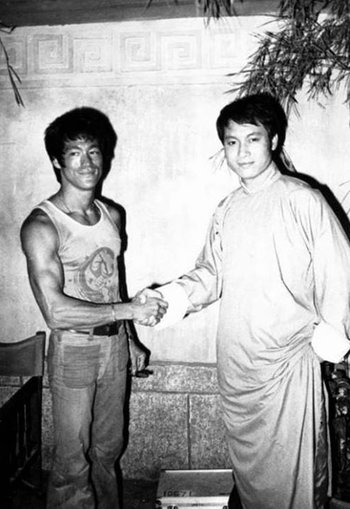 Hey, who's that guy wearing jeans standing next to Yueh Hua? note  Bruce Lee and Yueh Hua in 1972, when Bruce paid a visit to Shaw Brothers studios.
Advertisement:

Born Elliot Ngok as the eldest of family siblings, Yueh's father is a worker in the Shanghai Municipal Council who struggled to put food on the table. Having an interest in performing arts as a child, Yueh Hua at age 10 was inducted into the Beijing Dance Academy, deciding to pursue a career in acting.

In 1962, at age 19, Yueh Hua continues his studies in a Hong- Kong-based academy in acting sponsored by Shaw Brothers, then a domineering force in film-making. Graduating at top of his class (his former classmates includes various Shaw Brothers icons, including Cheng Pei-Pei and Chan Hung-lit), he adopted the name "Yueh Hua" to reflect his mainland Chinese heritage while working with a native, mostly Cantonese-based Hong Kong community.

Considered as one of the most versatile and prolific leading actors of Shaw Brothers, Yueh Hua has appeared in hundreds of films for Shaw Brothers, the most iconic being the Drunken Knight - considered as the Ur-Example of the Drunken Master trope - in the film, Come Drink With Me. His career includes roles ranging from drunks to scholarly warriors to wuxia swordsmen and assassins, as well as extending his roles to police officers and mob bosses. Due to his frequent collaborations with his close friend and former classmate, Cheng Pei-pei (in Come Drink With Me, Shadow Whip, Raw Courage, Princess Iron Fan and a few others), rumors abound that Yueh and Cheng are in a romantic relationship, although those rumors are proven to be false.

Yueh Hua officially retired from acting in 2015. Suffering from cancer in early 2017, Yueh would eventually pass away in October 2018 in Vancouver, Canada, where he resides after retirement. In the 38th Hong Kong Film Awards ceremony in 2019, Yueh Hua was given a dedication and honorable mention by the HKFAA's committee.