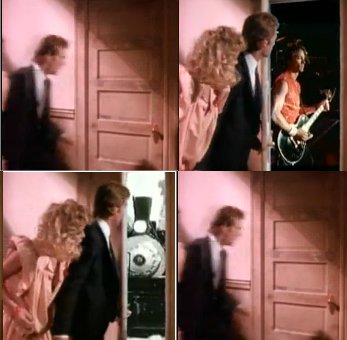 What the heroes are looking for is behind one door. The problem is that the heroes stand in a long hallway or circular room lined with doors in any direction they care to proceed. Every other door but the exit has something disheartening, dopey, dangerous, disastrous or deadly on the other side, but none of them are marked or visibly distinct from each other, so they have no choice but to try each one to find the way out. Named for the game of chance in which there's only one way to win and many ways to lose, this trope is the same thing — lots of doors lead nowhere (or nowhere good), but only one is the way forward.

The one trying the doors must be quick and slam the door before the danger on the other side emerges (or reaches out to grab them)!

Riddles, such as Knights and Knaves, may play some part in the process of deciding which door is the one that leads to reward or safety rather than confusion or danger. More enterprising or less white hatted heroes may fudge against the rules a bit and find a more creative method to determine which door is the one they want. Sometimes the danger behind the doors is the villain who can do the Offscreen Teleportation trick and be behind each door progressively.

In order to save money on camera shots or the wacky Stock Footage, sometimes the shot would show the character opening the door, accompanied by a sound effect that indicates a wild animal, monster or other unexpected danger lurks on the other side without ever showing it. With CGI being more prevalent in filmmaking, though, this is becoming less of a problem. If the scene is lighter fare and/or Played for Laughs, you can expect the Standard Snippet from "Yackety Sax" to accompany those trying the doors. The funnier the setting, the more likely it is that an oncoming locomotive will show up behind one of the doors.

An occasional variation is to have a room with no way out but the door one came in through, but opening it the second time, it now leads someplace else.

A form of Malevolent Architecture. Not to be confused with Scooby-Dooby Doors although often the long shot down the hallway is something both tropes have in common. If the door takes the hero back to the entrance, it's One of These Doors Is Not Like the Other. For the video game version, see Magical Mystery Doors.