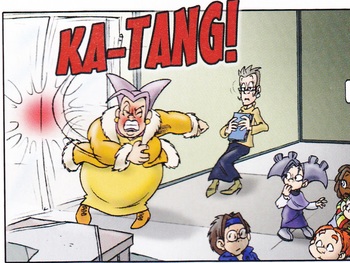 She must be really mad at that door.
"When I get angry, I just feel like slamming doors."
— Garfield, Garfield
Advertisement:

This is an act displayed when someone slams the door hard when he or she is really mad, usually when having an argument with somebody. If Played for Laughs, the slam can cause a vibration that causes stuff surrounding the door to crash down onto the floor, or even the door itself. If the door has a window in it or is made of glass, said glass will inevitably shatter.

This is an Anger Trope. Compare Tae Kwon Door for when the door is purposefully slammed to damage an opponent. Contrast The Door Slams You. This trope isn't related to Heel–Face Door-Slam, though it might go along with it nicely in order to emphasize it or even kill the would-be-reformed villain.

Morty slams the front door in a rage.

Morty slams the front door in a rage.