Film / I Was a Male War Bride 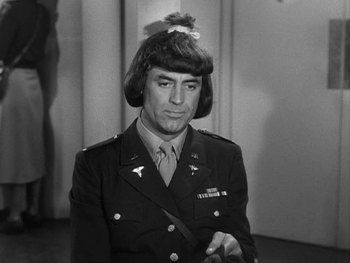 "I am an alien spouse of female military personnel en route to the United States under public law 271 of the Congress."
—Henri Rochard
Advertisement:

Captain Henri Rochard (Grant), of the French army, and Lieutenant Catherine Gates (Sheridan), of the American, are assigned a mission together to stop a German high-level scientist in postwar Germany. Through a wacky series of misadventures, they fall in love and encounter various bureaucratic hassles trying to get married.

When Catherine's army unit gets recalled back to the USA, things get worse: the only way they have to stay together is by invoking a law allowing the spouse of American army personnel to enter the country—the War Bride's act. Zany gender-confusing antics follow.