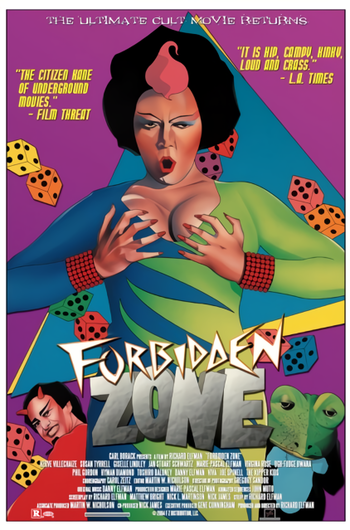 You have been warned.
Advertisement:

Forbidden Zone is a 1980 musical fantasy comedy film directed and written by Richard Elfman and Matthew Bright (who would later direct Freeway), created to be a last hurrah for his performance art troupe The Mystic Knights of the Oingo Boingo before Elfman's brother Danny reformed them as a successful New Wave and Ska band.

The plot revolves around a normal family, the Hercules, who move into a suburban home, of which the basement has a door to the strange Sixth Dimension. They avoid it but when the eldest daughter returns from her studies in France, curiosity attracts her to investigate. Hilarity Ensues. Heavily inspired by Cab Calloway, Betty Boop cartoons and Underground Comics.

The film is groundbreaking for being the first Danny Elfman–composed soundtrack for (no surprise considering his brother is the director/screenwriter, his brother's wife is the protagonist, and their father and grandfather both play characters in the film). Danny himself plays the devil while the rest of the original Oingo Boingo band (when it was known as The Mystic Knights of the Oingo Boingo) are here as his minions. The ensemble cast also include a post-Fantasy Island Hervé Villechaize and pre-Cry-Baby Susan Tyrell.

It had a huge influence on both Tim Burton and Paul Reubens, who first met while working on Pee-wee's Big Adventure. The decision was quickly made to base much of their film's visuals on Forbidden Zone, and to hire Danny Elfman to write the score. The rest is history.

A sequel is on its way: Forbidden Zone 2: Forbidden Galaxy. Here's a trailer

: the Princess (now Princess Polly) has apparently taken the helm and is taking the offensive to conquer Earth. Richard and Danny Elfman are both involved, as are Ego Plum and the Monster Man crew.