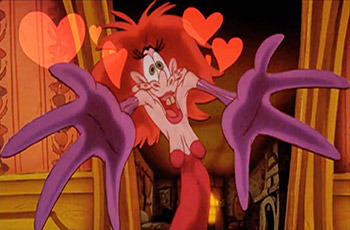 COME TO LENA!
She's my darkest nightmare
She chills me to the bone
With her tattoos and tracksuit
And cattle truck cologne
She was knocking back a schooner
With a bucket of KFC
She's pushing her way through the crowd, and she's coming for me!
— Six & Out, "Cyclone Sally"
Advertisement:

An ugly or overweight (usually) female character is noticeably attracted to a male protagonist. Perhaps she's not even hideous to begin with; she could in fact be a very gorgeous woman, but in cases like those, what will be unattractive about her is her personality. Either way, the protagonist realizes that this person is attracted to them and is profoundly uncomfortable with the whole idea, but the female character either doesn't realize he's not interested or is undeterred. Yet the character is not just uncomfortable; he's shocked, horrified, or disgusted. Even a wave and a smile from her will be treated as a fate worse than death for the recipient. Hilarity Ensues.

In some cases, the point of the joke is that the protagonist is too nice to say anything, thus allowing the situation to come up repeatedly. In others, just portraying the protagonist's reaction — which may be closer to mortal terror than awkwardness — is considered enough of a punchline on its own. He might employ Please Dump Me tactics in hopes that it will get her to leave. Or the admirer may become a Self-Proclaimed Love Interest.

The Abhorrent Admirer differs from more sympathetic characters in one key respect: the audience is expected to find her both unattractive and extremely unsympathetic, and is supposed to feel sorry for the protagonist because she has him in her sights and just won't take a hint or proves resistant to the clue-by-four.

These characters tend strongly to be female rather than male, as a result of a few different gender stereotypes. For one thing, No Guy Wants to Be Chased means that the mere fact that a woman takes the initiative in courting a man is often portrayed as evidence that she must have something wrong with her; for another, double standard rape means that sexually aggressive women are viewed as less threatening, and therefore more comical, than men who impose their attentions on obviously unwilling women. However, with time, the male "undesirable suitor" became more common in comedies.

This trope is at least Older Than Print; an early version is the medieval legend of the "loathly lady", which is the basis of "The Wife of Bath's Tale" in The Canterbury Tales by Geoffrey Chaucer. Loathly ladies also figure in several Child Ballads; they are usually under a curse, and may actually have been transformed into monsters. When the curse is broken, perhaps by True Love, they revert to their true form, as beautiful on the outside as on the inside. In fact, the trope may be as old as the realization that someone can be attracted to someone who doesn't love them back; a variant of sorts appears in The Epic of Gilgamesh, which is Older Than Dirt, when the goddess Ishtar offers the hero marriage but is rejected — though not because of her looks, but because bad things tend to happen to her lovers.

May or may not overlap with Stalker with a Crush, though that one usually isn't Played for Laughs. The Old Maid, Grande Dame, Brawn Hilda, and Lady Drunk are likely candidates to act out this trope. It's not unheard of for there to be more than one Abhorrent Admirer for the same character, either. Compare Extraverted Nerd, and Beast and Beauty. Contrast Ugly Guy, Hot Wife and Hot Guy, Ugly Wife. For versions where only the personality is a problem, see No Guy Wants to Be Chased, Romantic Runner-Up, Casanova Wannabe, and Prince Charming Wannabe (the Spear Counterparts). Kavorka Man is an inversion... and overwhelmingly male.

Gabi has a huge and obsessive crush on Nigel which is best shown in her villain song Poisonous Love.

Gabi has a huge and obsessive crush on Nigel which is best shown in her villain song Poisonous Love.