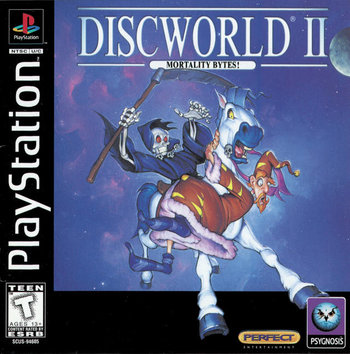 The second Discworld Adventure Game and a loose sequel to the first, with a plot that could vaguely be described as an extremely loose mashup of Reaper Man and Moving Pictures. The game opens as a drunken Rincewind and the Librarian are heading home and passing by the Fools' Guild, where they discover an Assassin has set up some kind of alchemical bomb and try to mess with it. Of course, they fail — if anything, they make things worse as they cause the bomb to detonate in such a way that Death, who was coming to gather up the souls of all the dead Fools, is blown up as well. A day or so later, the Wizards notice that Death has been taken out of commission when one of their comrades, Windle Poons, dies but fails to truly die, instead wandering off as a magic-wielding zombie with a really ticked off attitude.

Rincewind, on grounds of being unimportant, is sent all around Ankh-Morpork to gather up the materials needed for the Rite of AshkEnte. When he succeeds, though, they discover Death landed in XXXX and has decided to go on vacation, refusing to get back to the task of reaping souls. So, Rincewind is forced to figure out a solution, which ends up involving him as the temporary replacement for Death and getting Death a role as a "clicky" star because he's sick of people not appreciating him.